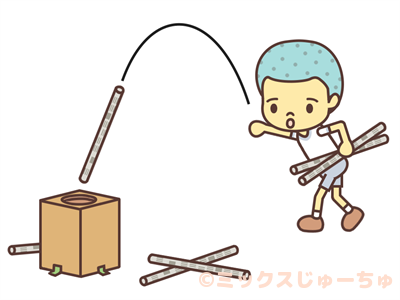 Preparations and how to make the materials

Cut a hole on top of a tall cardboard box. The hole will be the target.

Stick the box to the floor with curing tape.

Decide a starting line to throw the ball, and put curing tape on the floor.

Throw the stick to the target hole.

When the stick gets into the target hole, you can get a point or a prize.

You can decide the quantity of the sticks you throw.

Know-how and the points

You can get the goal more when you throw the stick upwards and make the stick describe an arc.

You can change the size of the hole or make several targets, to make the game harder.

Be careful not to make a hard and heavy stick, because it’ll be dangerous, when it hits someone.

Conquest the Ghosts with an Air Gun Game