This is a game that you guess a given theme looking at your friend’s movement. 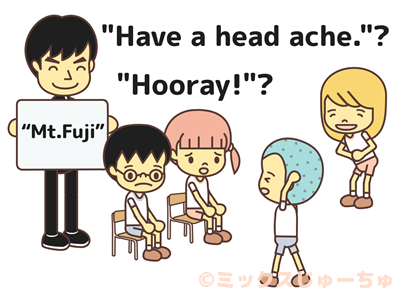 Choose one leader. Except the leader, make some teams. In each team, choose one person who does the gesture and the other will be the answerer.

Take turns and play by each team.

The other team who is not playing now looks from the audience seat.

The leader stands behind the answerers and shows a sketch book to the person who gestures.

On the sketch book, a theme is written on.

The person who does the gesture will make some pose or some movements without talking.

You can guess many times until you give a right answer.

When the answerers gave a right answer, the leader says “Ding Dong!” and give a next theme.

If the answerers can’t give a right answer even if they said many times, they can pass it and get a new theme.

You have sixty seconds.

All the team play like this and the team that gave a right answer most in sixty seconds is the winner.

The simple theme like “bear”, or “dog” are easy to guess.

The theme made of some words like “A fight of dogs” or “A bear doing a handstand” will be difficult and more fun.

Change the theme by the age of player.

Write down many themes to the sketch book before starting the game.

Before starting the game, decide the time limit and use the pass rule or not.

Ball-Toss Game with an Umbrella