This is a game that we need to cooperate and we also need to think strategies. 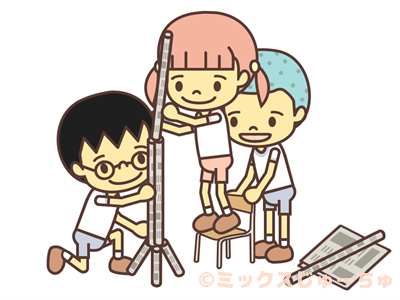 Make some teams from about three to five children.

Choose leader in each team.

Each team will get newspaper (about the amount of one morning) and a sticky tape.

Announce “Whatever the shape is, make a newspaper tower as high as possible. And the team which made a highest one will win.”

Give a thinking time for 5 minutes.

Everybody will give ideas about the tower in each team.

Make a tower in five minutes.

Five minutes later, measure the towers. And the team which made a highest one wins.

You can change the time limit considering the age of the children.

newspaper (about the amount of one morning), sticky tape, measure